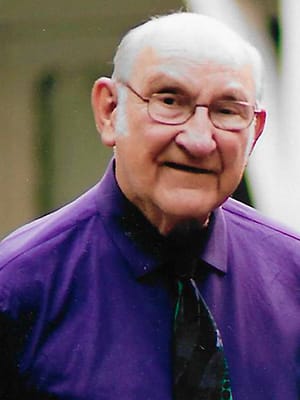 A Nebraska native, Don Hamann was born with a natural gift for story-telling, a true interest in people and an eye for pretty things. As a young man, he started many businesses and he often tells the story of the “motorized bicycle” that he marketed in Crete, where he grew up and graduated from high school.

So in 1957 after he had graduated from the University of Nebraska with a degree in business, it was a natural fit when Don’s dad, William (Bill) Hamann asked Don to partner with him and continue the tradition of Lincoln’s first fine jewelry store, Sartor Hamann.

Don flourished in the business and became well known in the jewelry industry as a leader and innovator. Among many industry positions he held through the years, he is the past President of the prestigious Jewelers of America, past Chairman of the Board of Jewelers Mutual Insurance and past President of the Nebraska-South Dakota Jewelers Association. He was also active in many local organizations such as the Downtown Lincoln Association and the Chamber of Commerce, to name only a few.

As the business grew, the 1970’s and 80’s were a time of great expansion. Sartor Hamann opened locations in the Gateway Mall in Lincoln, the Conestoga Mall in Grand Island and the Foothills Fashion Mall in Fort Collins, Colorado. In 1976, Don bought the Barkley Building at 1150 “O” Street in downtown Lincoln, demolished it and constructed the building where the current headquarters store and offices are located. When SouthPointe Pavillions opened, Don knew he wanted to be a part of it, and he opened a store there in 2003.

Don has always been on the leading edge of what is new and exciting in the jewelry industry and through the years has traveled annually to international shows including New York, Las Vegas and the incredible Tucson Gem Show. He has an innate ability to choose the most vibrant colored gemstones and select only the finest diamonds. His appreciation for beautiful things allows him to stay on top of the latest trends in style and fashion.

He is a strong believer in gemological education and has always encouraged his employees to earn their certifications through the Gemological Institute of America (GIA) as well as the prestigious American Gem Society (AGS).

Don has always loved his community and has a strong belief in giving back. Among his many interests is his love of gardening and growing roses in particular. In 2006 Don made a generous donation to the City of Lincoln to assist in the complete renovation of the Municipal Rose Garden at 27th and “C” Streets. The renovation campaign was led by the Lincoln Parks Foundation in conjunction with the Lincoln Rose Society. In recognition of Don’s lead gift, the garden was renamed The Hamann Rose Garden.

Don, along with his late wife Phoebe, has long been an ardent supporter of innumerable charities and foundations. They together, were particularly passionate about supporting music and the arts including theatre, music education in the Lincoln Public Schools, Lincoln’s Symphony Orchestra and the Lied Center. Westminster Presbyterian Church was always an important part of their lives as well.

Don’s philosophy is a true reflection of his deep Nebraska values…..

“Do business with honesty and integrity, carry only the finest quality merchandise, and treat our employees and customers like they are family.”