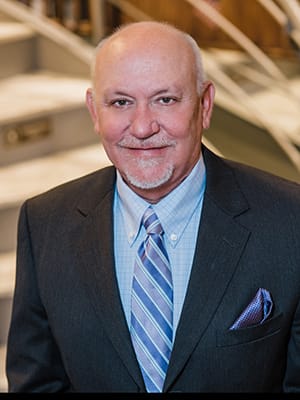 Rick Hamann is the Executive Vice President at Sartor Hamann Jewelers. You might say he grew up in the jewelry business because his dad, Don Hamann and grandfather, Bill Hamann were partners in Sartor Hamann from the time he was born. But it wasn’t until he was in his early 20’s that he decided to join them.

In 1980 he went to the Gemological Institute of America in Los Angeles and got his Graduate Gemologist degree, graduating close to the top of his class. He then did appraisals for Sartor Hamann, eventually moving into sales and management at the Downtown Lincoln store.

After time, he wanted to expand his horizons, so he created his own company, Richard Hamann’s Diamond Design. That ten-year venture was significant for him and helped to broaden his business experience. Following that time in his life, he moved to Scottsdale, AZ where he gained other valuable marketing and sales experience. He worked for an advertising agency and later was in sales management for an Acura and Honda dealership.

Later he moved to Orange County, CA and went to work for the first location of Robbins Brothers, “The Engagement Ring Store” where he gained invaluable experience in the jewelry industry from a much broader perspective.

Due to family health reasons, he moved back to Lincoln in the mid 1990’s and became the Sales Manager for Sartor Hamann which had by that time expanded to a total of 5 stores located in Lincoln, Grand Island, and Fort Collins, CO. As a result of his oversight, the company experienced an increase in sales of nearly 50% in the first two years due to his changes in the overall marketing strategy and employee compensation plan.

After the company’s General Manager left, he took over that position and created some of the most memorable marketing campaigns ever. The “Diamond Coaches” series of radio ads became an instant hit and sales again went through the roof. And he had a lot of fun recording the ads with his dad, Don!

Today, the Sartor Hamann management team consists of Rick, along with daughter Jordan Hamann Heiser, and Jeff Wells, GM. Together, they run the day-to-day operations.

One of Rick’s great loves has always been music, dating back to his early days when he was in several rock bands. He toured the entire country with his most successful band, Keystone, which is currently under nomination to the Nebraska Rock & Roll Hall of Fame. He still loves going to concerts and listening to great music live. He also mixes sound for the music at his church and he enjoys doing his radio segment every Thursday morning at 6:45 A.M. with his “Song of the Day” on 93.7 The Ticket with Nebraska Legend, Steve Sipple.

Rick also loves to spend time fishing at his lake property in Ashland, playing golf with his buddies in Lincoln and Scottsdale and spoiling his granddaughter, Jovie.